It’s a little known fact that the Karma is the latest model of “wave ski” from Jackson Kayak.  At least that’s what it was, in order to meet airline regulations, for 20 nerve-racking minutes as we checked in our 4 sparkling new Karmas at the Denver United ticket counter in route to Quito, Ecuador.  But over the course of a day’s travel and by the magic of crossing the equator, our boats had transformed into Jackson’s latest incarnation of creek boating technology.  So we shunned the salinated waves of the Pacific coast and headed east for the clear waters and cloud forests of the Quijos Valley.

Our destination, a 3 hour drive from the populous capital of Quito, sent us bounding east out of the city, eager with anticipation.  We reached an apex near 14,000 feet and then wound down the pass into a lush valley.  While the plentitude of sheer mountain peaks leaves a severe dearth of flat ground, much to the consternation of the local cattle, there is no shortage of water and gradient draining through the canyon depths. 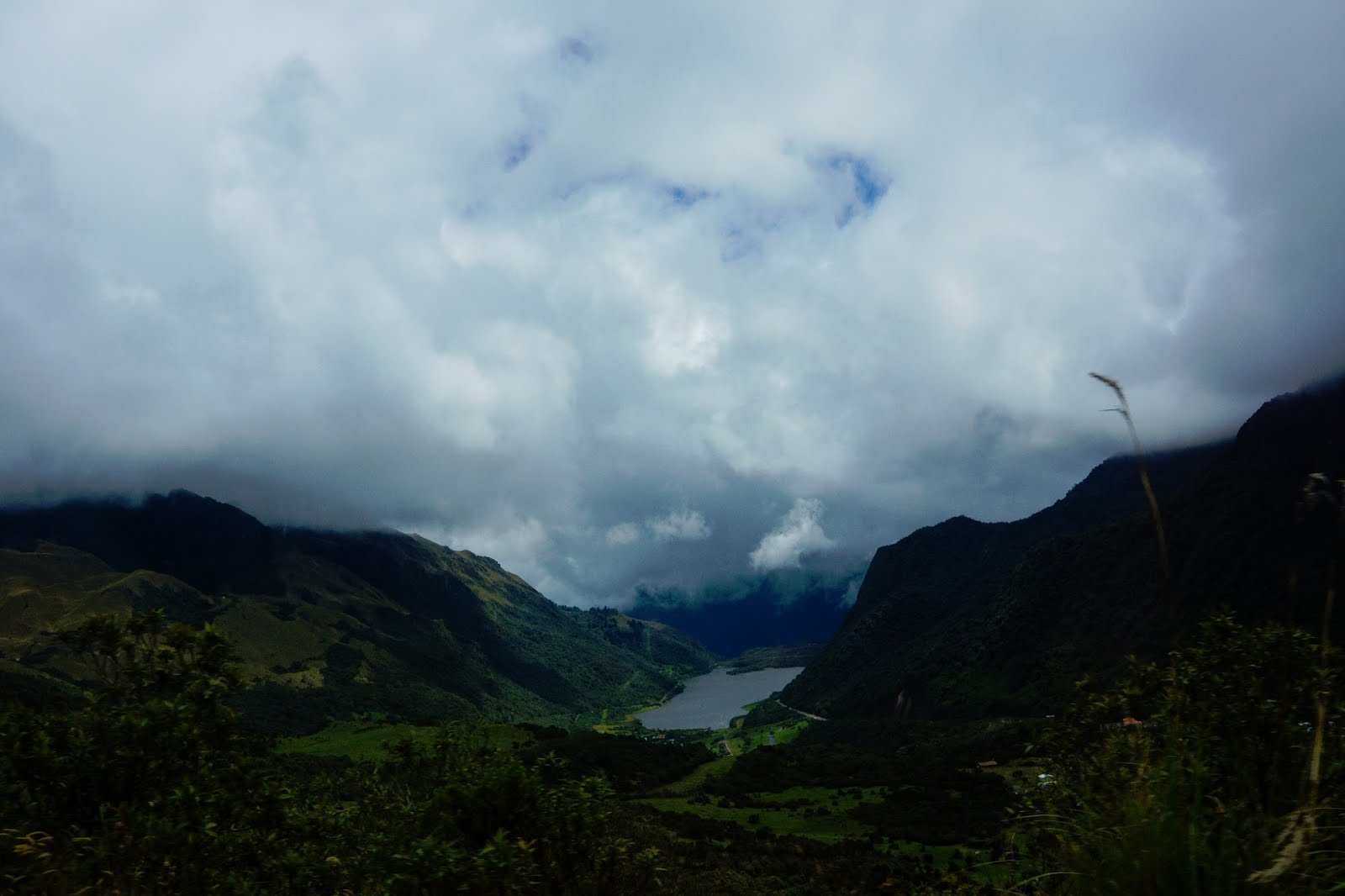 We’d be in the care of Chris and Andrea, owners of Endless Adventures International, for the next 10 days.  The Rio Quijos is the main artery of this valley, carved into the depths of the altitudinous Andes mountains, offering over 50 miles of continuous quality whitewater and spectacular scenery, on that river alone.  After settling into our lodge outside the small town of San Francisco de Borja, we had just enough time to warm up on the local Quijos run.  We walked our boats 100 yards down to the river.  Trading in my tuque (I learned some Canadian vocabulary on the trip) and puffy coat for shorts and a thin polypro layer underneath my drytop, I geared up on the banks of the Rio Quijos, warm and happy to test out my new medium Karma. 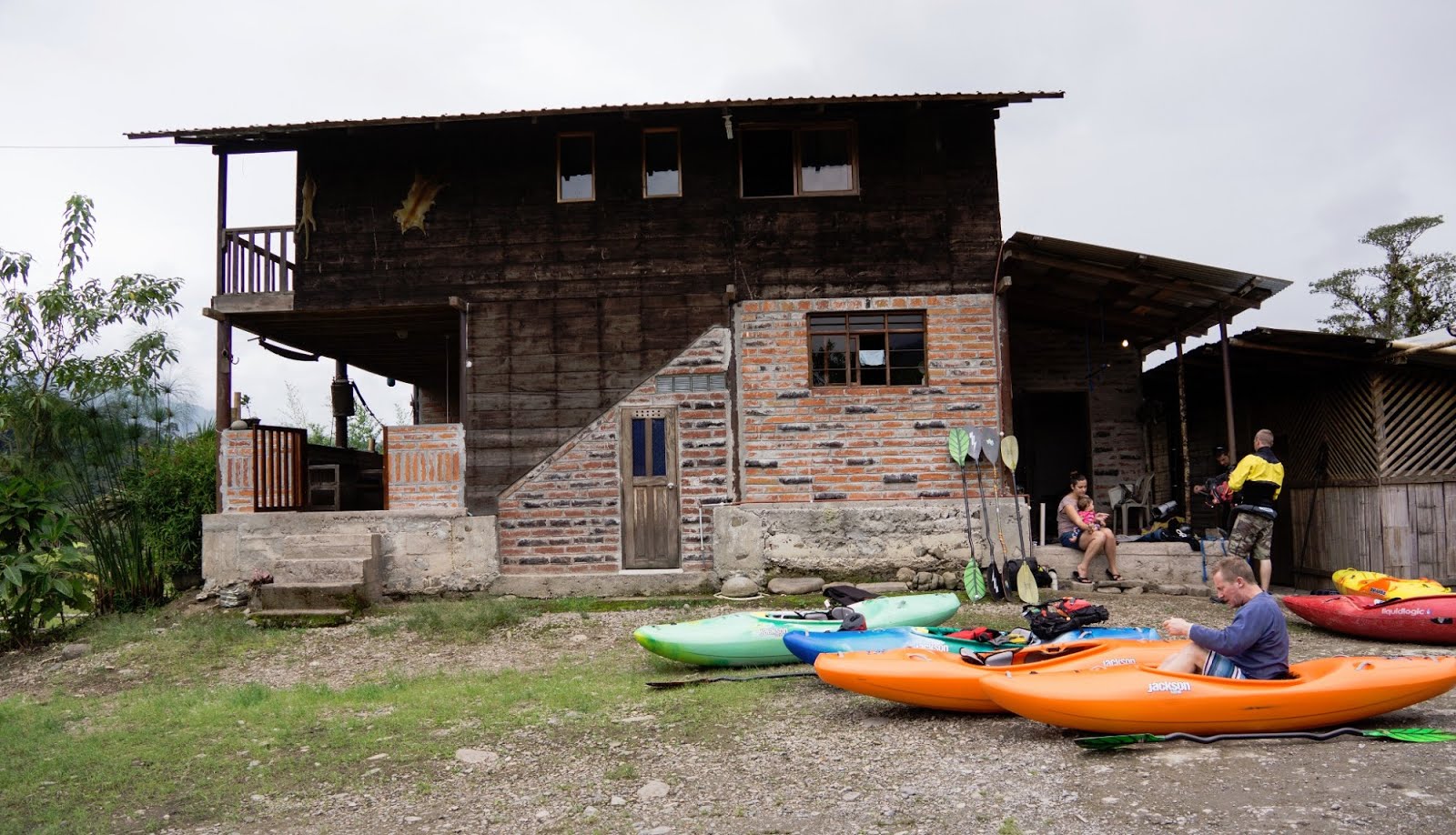 Preparing our boats for the first day on the river.

A few days ago at Marty’s place in Boulder, I’d outfitted my Karma.  I stuffed in all the provided hip pad shims to satisfy my svelte figure.  The most time consuming part was shaving the foam bulkhead pads down narrow enough to allow the bulkhead to slide back to accommodate my long legs.  All it took was those two adjustments and my medium Karma was ready to go.  With the new outfitting there is no happy seat, only foam, so you just sit down.  The backband has been raised higher, a feature that I love.  The backband also tilts back and makes access to the stern a breeze – a feature I highly value for constantly accessing my camera bag.

Not having ever been in this boat before, several months with no kayaking, and having just recovered from a nasty bout of the flu, I was surprisingly overconfident in my ability to conquer anything Ecuador could throw at me.  That lasted about 5 minutes, until we entered the first rapid.  The Quijos was at a solid flow after a large rain bump the previous week.  I dropped into a wave hole and instantly got flipped.  Fortunately my obsessive compulsive roll practice kicked into gear and I rolled up with a smile on my face.  Well, at least I know the Karma is easy to roll.

An hour in, we encountered the largest rapid on the run called, El Torro, no doubt named in honor of what you’ll feel like you’re fighting if you end up in the thunderous ledge hole at the bottom.  By this point, I had begun to figure out the balance points on the Karma and was feeling much better.  The move consisted of staying upright through some pushy waves and holes at the top and making a 45 degree turn to skirt the grande hole at the bottom .  Everything happened faster than I was expecting, but the Karma pushed through all the h(oles at the top with little hesitation, not losing speed and holding a line.  When my eyes finally cleared I saw my path to freedom quickly approaching to my right.  I threw in a sweep stroke and the Karma turned on a dime.  I charged forward and the Karma was up to speed in two strokes.  The maneuverability of the medium Karma is a feature I found myself enjoying the entire trip.  It turns with the ease of a much shorter boat.  I’d made it through the first test of the trip, but my buddy Dave wasn’t so lucky.  I found him swimming in the swirling eddy below.  Fortunately nothing but some ego was lost. 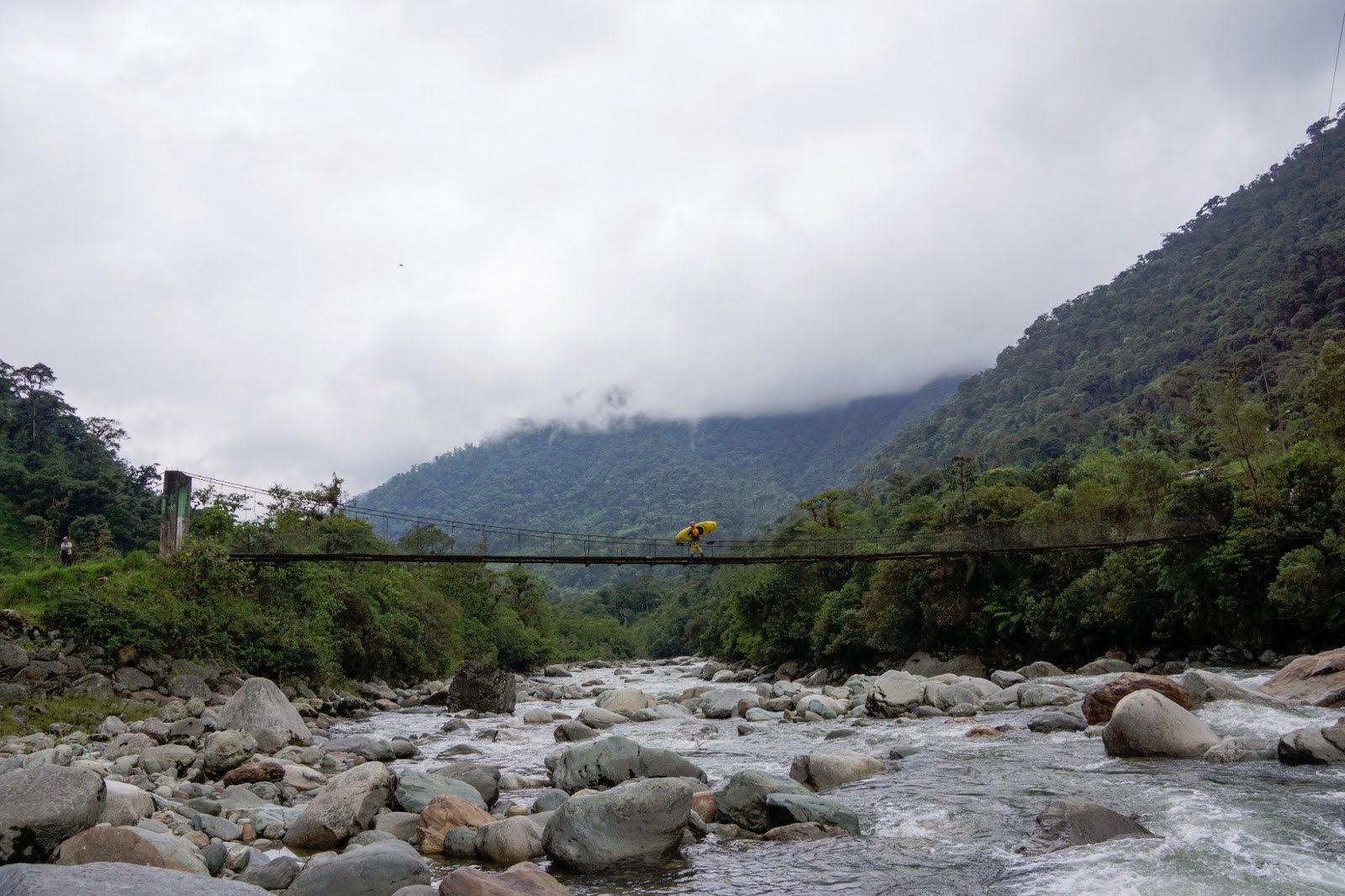 A typical scene of an Ecuador river put-in.

A couple days later we meandered to lower altitude to do an overnight run on the Rio Hollin.  The Hollin starts off with a straightforward 18 footer.  This was a chance to test the Karma loaded and see how it resurfaced off a waterfall – oh yeah, and have a lot of fun in the process.  A brief look revealed no cave to get pushed into and a giant pool at the bottom.  This is the kind of drop that’s pure fun with almost no danger.  Not having an 18 year old’s back, I decided to opt for diving deep just in case the landing was firm.  I rode up on the side of the curler, took a gentle left stroke to avoid pitching forward and braced for impact.  The landing was so soft I barely felt it.  I dove deep, but the Karma resurfaced slowly and in control.  I moved my paddle into a brace position and found myself being righted as I resurfaced as if the Karma knew which way was up.  I’m pretty sure I was oriented almost upside down at some point, but my amigos on shore didn’t think I’d rolled at all. 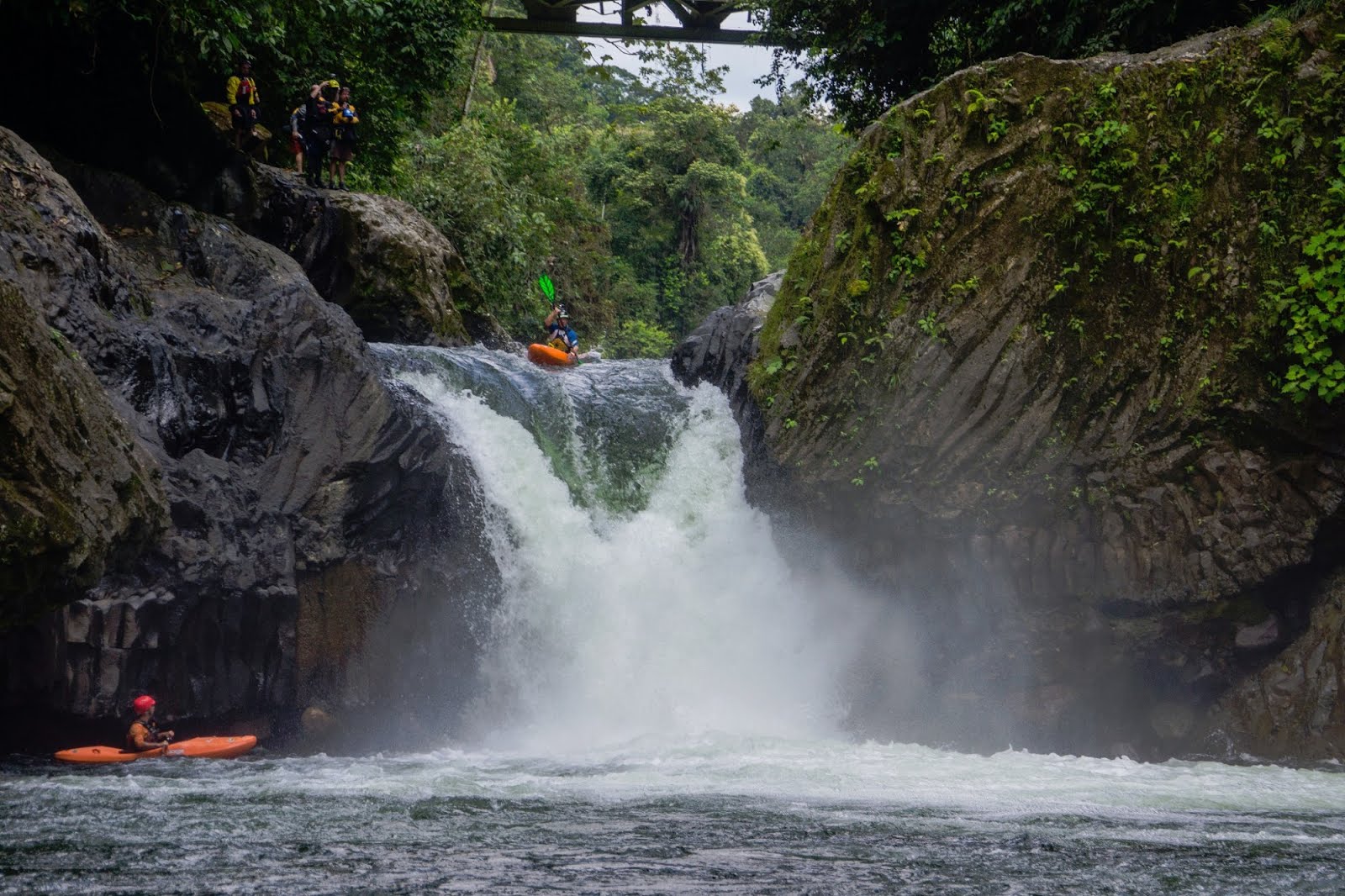 The Karma took the weight for the overnighter with aplomb.  I went with my standard overnight setup: one drybag on each side of the stern and a Watershed bag behind the seat.  Everything slid easily in the back and there was just enough room to fit my Watershed horizontally behind the seat.  I adjusted the seat a notch forward, which is so easy it can be done while you’re still in the boat.  You just release one thumb bolt, slide it forward, and reattach.  The Karma took the extra weight remarkably well, and I can’t say I noticed much difference once on the water.  Unlike my old Jefe, there was plenty of legroom up front for my long legs to handle moving the seat forward.

A couple more days of sandy beaches, jungle scenery and waterfalls and we were back to the Quijos Valley to paddle the famous Cheesehouse (or Casa de Queso) section.  This was our most challenging whitewater to date, with a solid medium flow it probably warrants a class IV-V rating.  Really feeling back in the groove and now used to my new Karma, I was eager for a little more challenge.  At least by Colorado standards, the Quijos has a pushier feel to it and requires driving hard for your lines.  While the Karma’s rocker profile and voluminous front end did a great job staying on top of features, I did find it getting pointed offline from time to time by a powerful wave hole, of which there were many.  Fortunately, the medium Karma is so maneuverable one small stroke generally brings it back on line.  The boat liked to be driven, and too much casual floating could lead to unpredictable behavior. 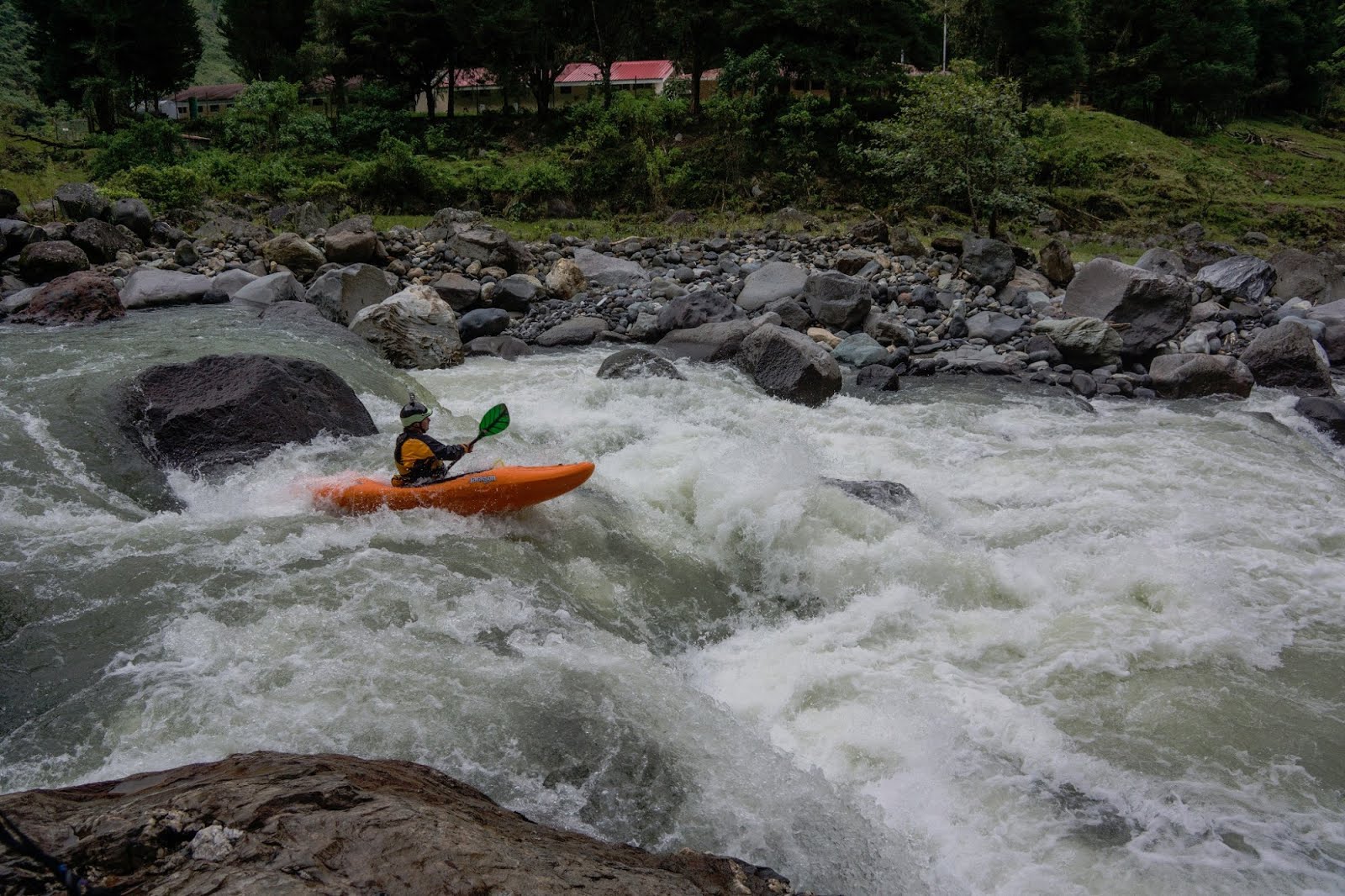 Scott testing the Karma on the Powerhouse rapid on the Quijos.

Did I mention the crazy secondary stability on the Karma?  A couple days later we paddled this same section badly hungover after a rockin Ecuadorian style independance day celebration.  A hangover is a good way to put secondary stability to the test.  There’s no better way to get hungover than a few shots of some Ecuadorian aguardiente home brew (a sugarcane moonshine served hot).  When the locals start feeding you hot aguardiente from a plastic cup, buckle down for a long night.  So, not being quite 100% the following day and dropping into the Powerhouse rapid, I deflected off the center rock and onto a hard right brace.  I held the brace through the next hole and pulled myself up to the amazement of my buddies on the bank who were sure I would flip in the swirling currents as I held a 90+ degree edge. The secondary stability on this boat is a unique feature. 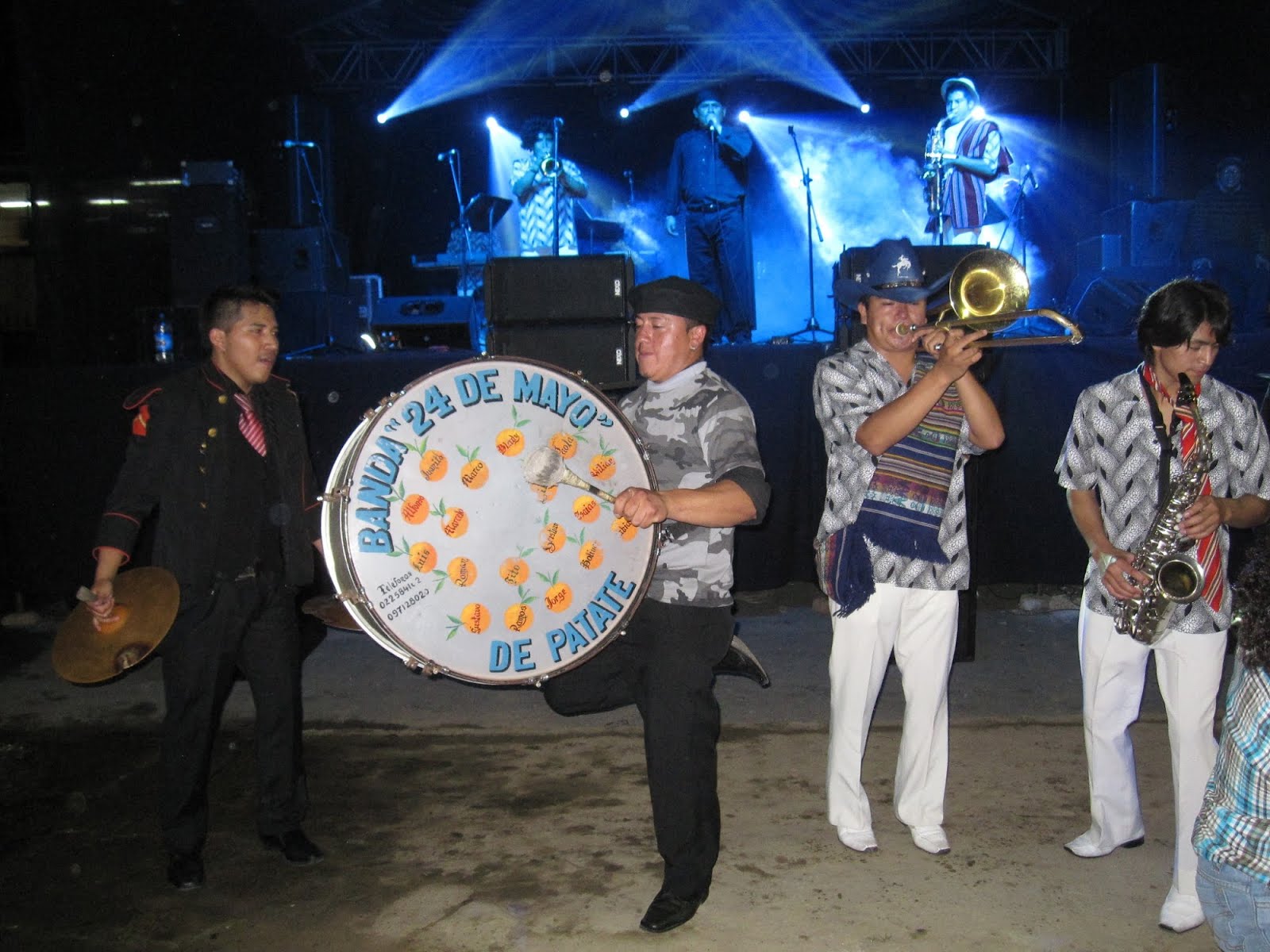 The Oyacachi is an Ecuador classic.  Drive to the town of El Chaco, turn left and continue down a road until you reach the middle of nowhere.  The typically run section is a class IV-IV+ hole punching extravaganza and an excellent opportunity to test out the Karma’s hole punching prowess.  Although the large Karma is a speed demon, I found the medium to have about average speed for its size.  They squared off the end of the stern on the Karma, a design that’s intended to help push the boat out of holes.  I don’t know if it’s the squared off stern or something else, but my Oyacachi test results reveal that the boat is a hole punching machine. As my buddy Dave said, it feels like you’re cheating punching holes in the Karma.  I felt like a wet watermelon seed everytime I dropped into a hole.  The one catch though, is it likes to push you into a stern squirt.  This probably helps propel the boat out of the hole, but it can leave you in a poor control position, or worse yet push you all the way over the back.  I found it critical to lean aggressively forward punching through holes to keep the boat flat.  The Oyacachi also offers numerous boofs and the Karma excelled in this arena.  The rocker profile seems to be conducive to keep the bow up and slides well when ramping up a rock boof.  Even though the Karma has more pronounced edges than any creekboat I’ve ever paddled, I never noticed them catching in mank or boofing rocks.  The bow tended to stay above the water and accelerated forward when landing, just as a creekboat should. 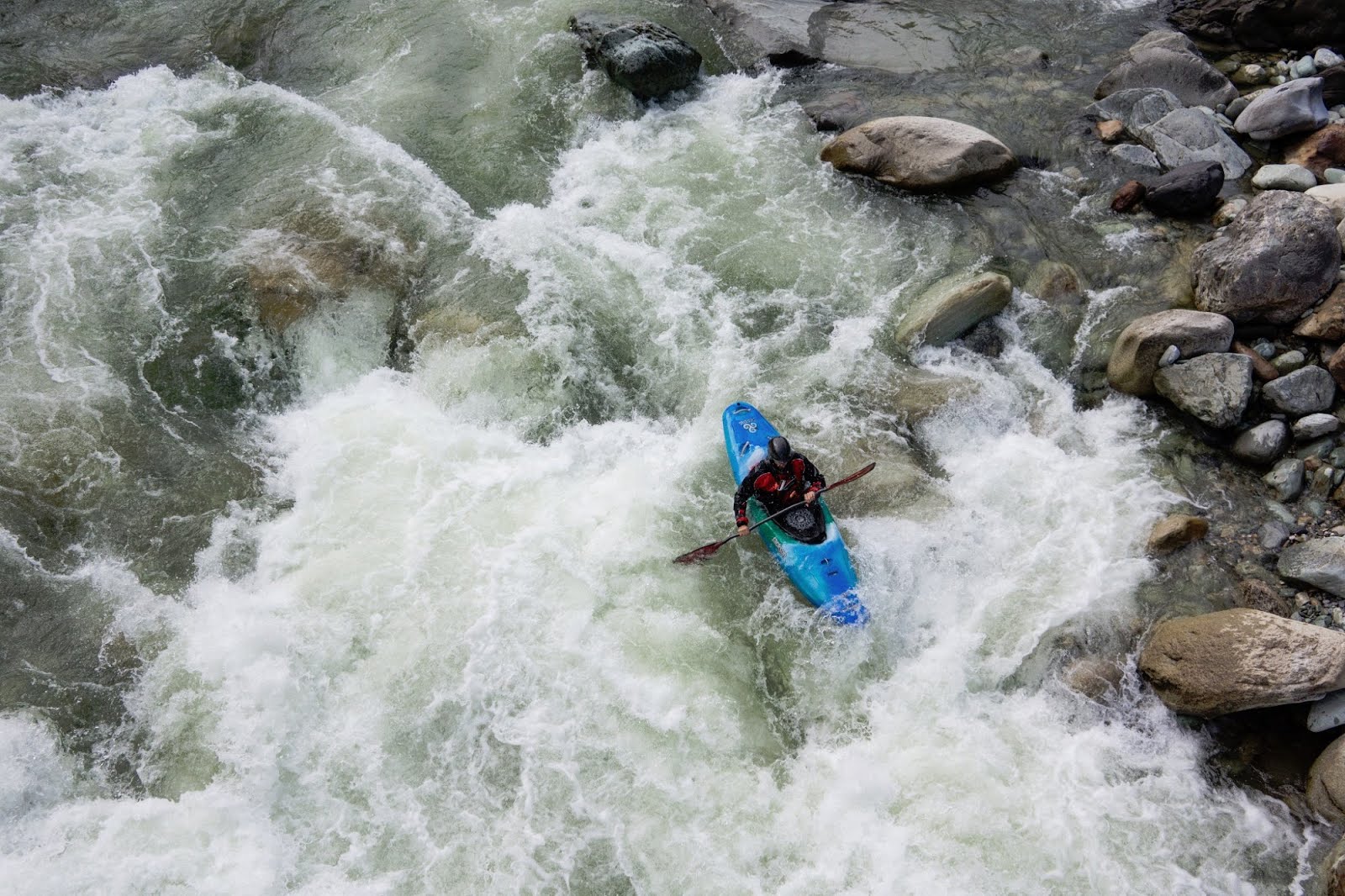 Me punching holes on the Oyacachi. Somebody’s gotta do it.

There’s not a much better escape from a dry, brown, cold, and dark Colorado winter than paddling the jungles of Ecuador with some friends.  The Karma was a perfect ride for the variety of paddling conditions the country can throw at you and a satisfying new iteration in creekboat design.  Personally, I’ve made a few mistakes in my life and my karma may not quite be up to that par.  It’s said that money can’t buy happiness, so it’s nice to know that money can buy Karma.