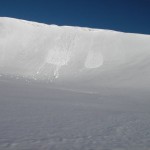 Friday afternoon 5pm – With the much appreciated support of Thredbo Ski Resort we jumped onto the ‘Crackenback’ chairlift with our boats and over night gear and had an easy trip to the top of the chair. It was interesting looking at the surprised faces of the on-coming people descending on the chairs as they made their way back from hiking to Mt Kosciuszko. They were obviously wondering why there were a couple of stupid looking guys riding up the chair late in the afternoon with kayaks on their laps during a down-pour of rain and an approaching thunderstorm.

From the top of the chair we began to hike out into the alpine area across the drifts of snow which were still prevailing from the winter season. After an hour or 2 we arrived at Lake Cootapatamba where we had planned to put in. Unsurprisingly the lake was still under a couple of metres of snow. So we sat on our boats and slid a couple of kms down the creek line to Cootapatamba Hut where the river was then opened up, enabling us to begin paddling. The first kilometre or so was very cruisy as we floated along past the walls of snow that lined the river. Then we arrived at the biggest horizon line that I’ve ever paddled over. The view stretched for a couple of hundred kms to the South West into Victoria. From there we spent a couple of hours paddling down stream, with a few portages around some ugly drops and some nice grade 3 read-and-run creeking. We then slept in bivvy bags on a sloping uncomfortable rock beside the river.

Saturday morning 8 am – We were very excited to put on the river as we anticipated a full day of exceptional creeking. We were unsure as to whether we would make it own to Geehi on this day, or whether it would take us until Sunday. From 8am until 10am we had an absolute blast. The river was a steep, constant grade 3-4 rapid which was mostly read and run with the need to scout the odd line and a quick portage here and there. With the spring thaw running at high intensity, the river was building in volume amazingly fast as regular tributaries cascaded in. We dropped a fair elevation, getting down to 1500m altitude (450m lower than Cootapatamba)

Saturday 10 am – We arrived at a place we had identified on the map to be an epic and mandatory portage, where the river drops 600 m vertical over only 1.8 km. This area is named ‘Dead Man’s Gulley’. The river dropped away with waterfall after waterfall. We began to portage on the river left. The traverse proved to be the most difficult forest that we have ever attempted to walk through, let alone while dragging boats full of camping gear. The massive 2003 bush fires have stimulated so much re-growth, that the biggest gaps found between the eucalypts were only about 4 inches. The bush bashing was so slow that it took us 2 hours to get about 300 meters across. We then arrived at a cliff where we could view the remainder of the portage. A conservative estimate would suggest that to continue the portage could take at least a couple of weeks, or even months and would be potentially deadly with the gradient. Therefore, we made the call to hike with all of the gear back up to the put in and over the mountain range to Thredbo Village. After already battling for 2 hours through the bush, we continued the hike home which took another 9 hours.

9pm – We arrived at the top of the main ski run at Thredbo. We then sat on our boats and slid on the grass back down the ski run to the car.

The morals to this story are:
1 Boats perform much better when floating in water rather than being carried over mountains.
2 If you ever attempt to paddle from Cootapatamba to Geehi, you won’t make it through, but please let me know how you go and be careful.
3 The Western faces of Australia’s alpine area are bloody steep.