Kalama Falls wasn’t on my radar until I’d heard about Chris Korbulic running it earlier this year. It looked like a great drop and I had just gotten back from a winter in the Mexican jungle! So many good waterfalls down there that I was fired up. Jah Bison had just run it, so it didn’t take much to talk a few friends into grabbing their kits and making the drive south from Seattle. 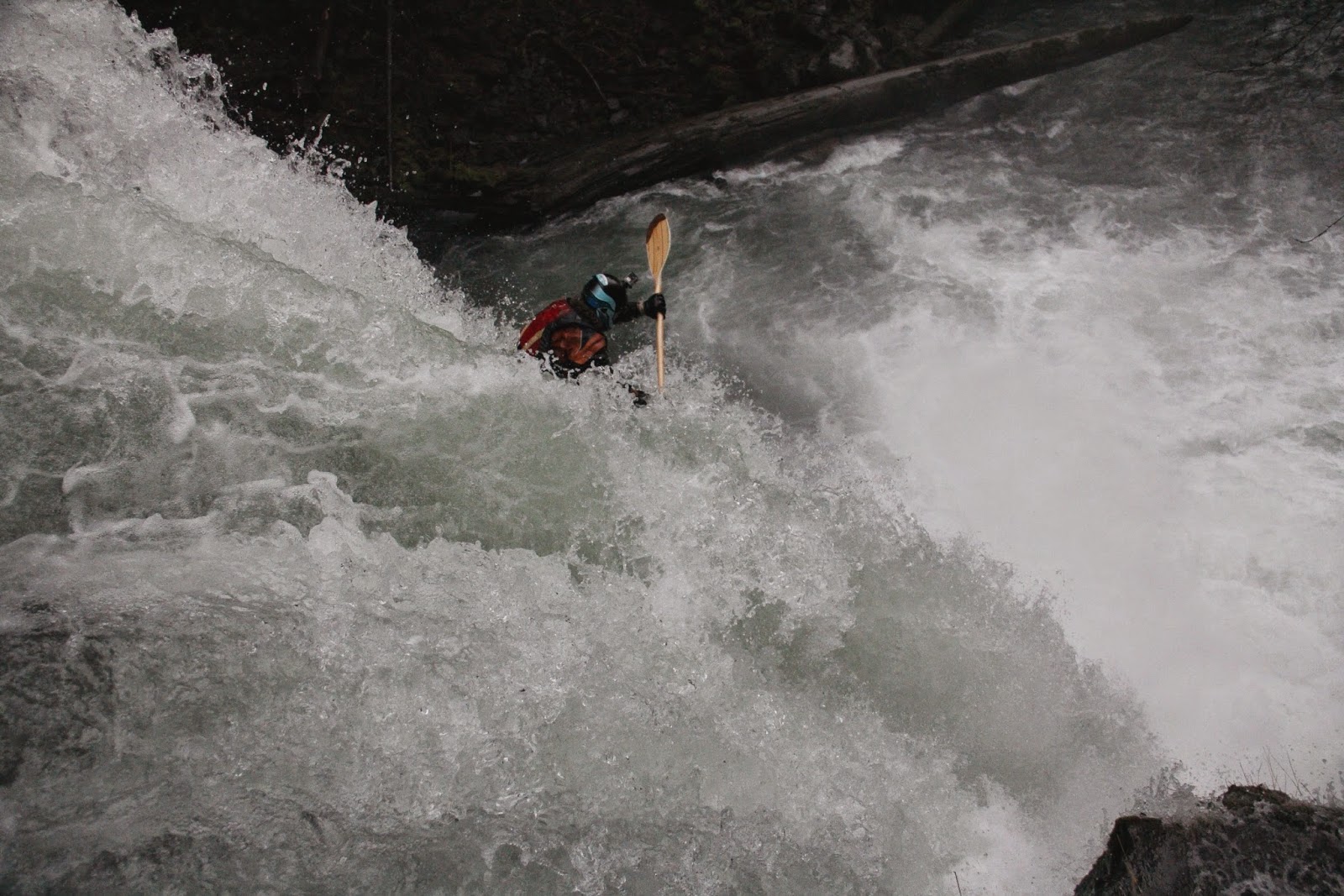 It was so perfect looking from all the video I had seen, but… just like most of the waterfalls in the PNW.. it wasn’t just falling off the lip. And it wasn’t low either. The thing about waterfalls vs class V runs, you only come for the one drop, so there is plenty of time to look at it and think, wonder, and plan… and get a little nervous! When I get nervous I usually like to go first, but this time I really wanted to shoot photos too.
Jah went first and laid down a super sick line! Ellie went next and had a pretty good line only her skirt blew on impact. Luckily good safety had been set and we had a brief discussion beforehand about hazards… mainly the massive trees surrounding the pool at the bottom. Ellie and her kit made it out just fine.
I was next and was pretty nervous even though I knew I was gonna stomp the drop. It is an interesting place to be, standing above a waterfall. The emotions that run through my body… beaten back by the logical mind. Going through the steps and ‘living’ the descent before sliding into the water. It wasn’t as straightforward as the drops I’d run in Mexico and it was cold! I’d come back from Mexico with a few fractured ribs and had passed on another waterfall in the Gorge earlier in the spring. That’s the other thing about waterfallin’… whichever way it goes, good or bad, it goes that way in a hurry. I knew I had to be spot on the whole way down, even though I had an itchy trigger finger.
My ribs felt great, but all these emotions kept creeping back in. The mind is a terrible thing to waste, so I focused, got in my boat and gave the signal I was going for it! As I launched I realized the entry was very shallow and I had to scramble to get to my spot in the middle. There was a wave-hole guarding the lip that would take some speed away if I punched it and some tricky current as I made my approach. Riding up on a curler next to the hole, I carried all my speed to the lip and as the water rolled off… everything went into slow motion.
As I rolled off the lip I could see I was on the left side of the veil and it was very easy to control my direction, pitch and wether I fell into the void to the left of the veil or stayed on the spine of this hulking beast and rode it down into the frothing pool below!! BOOM!!! Not a huge hit, set up to roll, switch sides quick and roll before going into the big tree at the bottom.
I was at the bottom and now it was Logan’s turn.  He got ready to go, but wound up a little further left than I had been, landed a bit flatter and took a paddle to the face. A good line with an unfortunate ending. Luckily, Logan is a happy guy and chalked it up as a beatering that was over quickly!
Fish decided to wait for another day and the rest of us were quite pleased with the day, even Logan. Logan knows, and you should too, these three simple rules to a blissful life:
Chicks dig scars
Pain is temporary
Victory is forever
Thanks for coming to another spine tingling episode of Creek Sides theatre. Until next time…
“Keep your feet on the ground and keep reaching for the stars!” – Casey Kasem